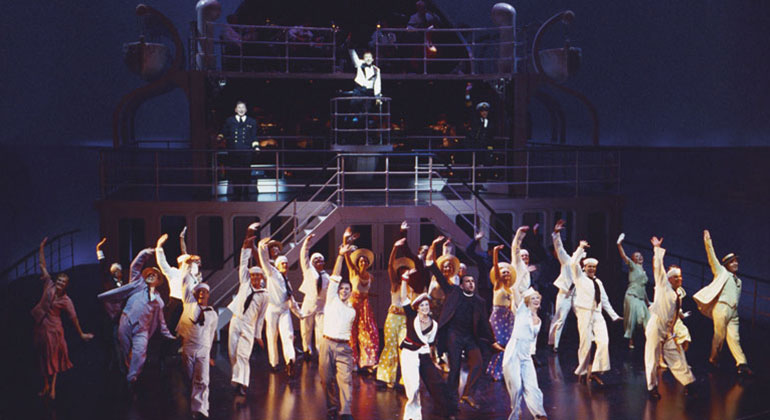 This production won the 2003 Critics’ Circle Theatre Award for 'Best Musical' and the 2003 Olivier Award for 'Outstanding Musical Production'.

...The original story by P.G. Wodehouse and Guy Bolton has had two rewrites, and Trevor Nunn's buoyant production - you'd have to be a hard-hearted Scrooge not to have a good time - uses them both... Reno was written for Ethel Merman... Trevor Nutin's production has Sally Ann Triplett as Reno, a good gal with a fine personality. But she ain't no Merman... To fill the National's vast Olivier stage, we have big amplified sound, big cheesy grins, and big tap dance sequences. I am no slouch at being a grouch but I still had a great time, and so will you...

...Nunn pitches the material with just the right degree of potty pizzazz in a production powered by a spot-on cast who all have the crisp comic outlines of a cartoon... Sally Ann Triplett is sensational as Reno Sweeney, the tough-broad evangelist siren, belting her lungs out with a brassy wit and verve and displaying a gift for physical clowning that gives velocity and variety to those clever but dramatically static songs... To adapt one of the lyrics, Nunn's production is de-licious, de-lightful, de-lovely – and de-finitive.