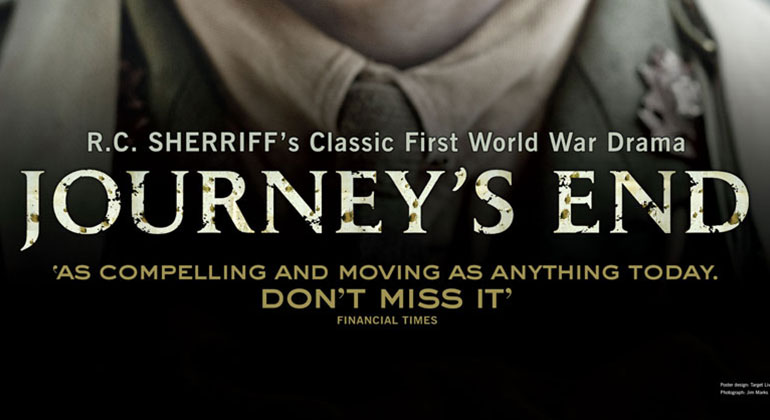 In the days leading up to the last great German offensive of the First World War, Raleigh, an 18 year old solider joins a besieged company of soldiers in the British trenches at St. Quentin.  There he finds his new comrades being led by his old school friend Stanhope, but discovers that the man in army greens is much changed from the boy he left behind in cricketing whites.

Journey's End is the Oliver-nominated, Tony and Drama Desk award winning production directed by David Grindley that won critical acclaim in the West End and on Broadway.  R.C. Sherriff's masterpiece is a must see of British Theatre.

Based on the author's own experience of the Front and life in the trenches, it celebrates humour and courage in the face of certain tragedy and remains an important reminder of the horrors of war and the real, unromanticised  heroes who fought it.

As our young men continue to fight and die for their country in foreign fields, this tale of ordinary men fact extraordinary circumstances exposed the impact of war  past and present and why in remembrance their sacrifices cannot be forgotten.

The Producers reunited the original creative team from the highly successful West End production of Journey's End which opened in 2003.  Due to its critical and commercial success Journey's End played in the West End until 2005 whilst simultaneously touring the UK.  Its UK success led to the 2007 Broadway production winning both the 2007 Tony Award for Best Revival and Drama Desk Award for Outstanding Revival.  The critics called the production gripping, outstanding, deeply moving and compelling.

When David Grindley's landmark production returns it was six years since it was last seen. During that period the British Army suffered hundreds of casualties in Afghanistan, bringing military sacrifice to a whole new generation.  Recently the last British survivor of World War One died amidst a national outpouring of grief, highlighting the fact that World War One still resonates with the nation.