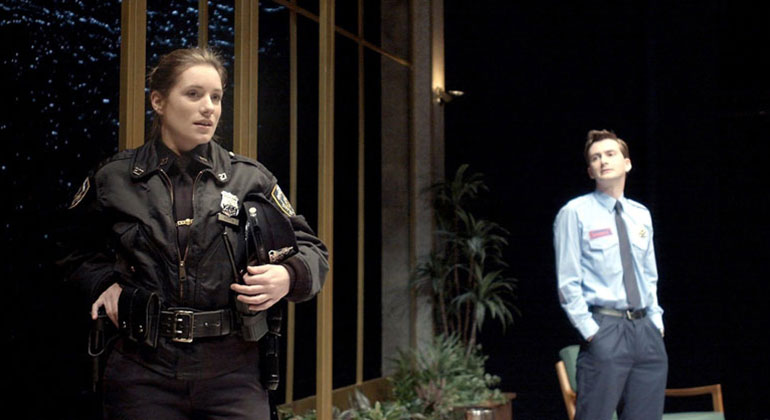 ...The best news this week is that Mark Brokaw's terrific production of Lobby Hero at the Donmar boasts no stars at all. Except, that is, the writer.

Kenneth Lonergan shot to fame as the writer/director of the tender-hearted, Oscar nominated You Can Count On Me but his theatre career is no small fry. London is already hosting his surprising and sprightly This Is Our Youth but his latest play is better yet.

Line by line, the felicity of the writing is dazzling. Like Mamet but, and this is crucial, with far more compassion, Lonergan grips the audience by sketching character incredibly fast. There's no laborious set-up. Instead - and this may be to do with his screenwriting expertise - he's forever cutting to the dramatic chase, creating high friction out of seemingly inconsequential observation.

Sweet but shiftless Jeff (David Tennant) mans the desk overlooking the street in a New York apartment building (beautifully realised by Rob Jones) and has a run-in with his boss (a marvellously self-assured Gary MacDonald), who stoutly believes in playing by the rules and bawls out wisecracking Jeff for not signing in a police visit to the building. Tiny tensions flare up as they jockey for position but what's really going on is Lonergan setting up his gripping, cunningly laced plot and unobtrusively planting his themes. Structurally, it's like the similarly character-driven sequence in the Peter Weir movie Witness where Harrison Ford is shown around his Amish hideaway. Beneath the character-building Weir is setting you up for the climactic chase. And, like Witness, the tension builds and builds.

The wonderfully convincing Charlotte Randle and Dominic Rowan turn up as a rookie cop and her smug partner, and from there on in, all four dance a witty and threatening game of courtship and connivance. Allegiances are blown apart, with everyone seeking alibis for their casual and even criminal behaviour, but halfway through you suddenly realise that everyone - audience included - is up to their necks in properly serious moral dilemmas about culpability, justice, race, the legal system and the dangers of the truth.

Every second in Brokaw's engrossing production has been thought through and the quartet of actors is so thrillingly poised you simply don't care which pairing is on stage - you just hang upon their every word.