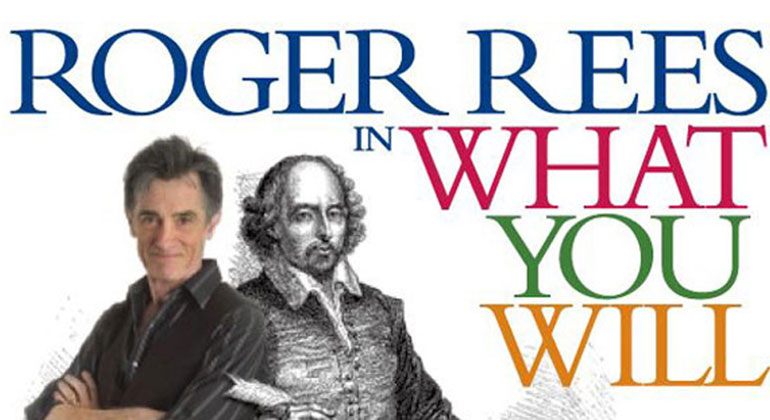 Tony and Olivier Award winning stage, screen and television actor Roger Rees returned to the West End in What You Will, playing for a limited three-week season at the Apollo Theatre, Shaftesbury Avenue from 18th September 2012.

This hysterical (and occasionally historical) 90-minute gallop through all things Shakespearean is an irreverent one-man everything there is ‘to be or not to be' about William Shakespeare: the greatest soliloquies ever written along with accounts of the funniest disasters ever perpetrated on the stage. Juliet's foolish nurse, gory Macbeth, Hamlet, Richard II, even Charles Dickens, James Thurber, Noel Coward and Stevie Wonder all make appearances during the evening.

Drawing on his 22 years as a company member of the Royal Shakespeare Company, celebrated on both sides of the Atlantic for his performance in the title role of The Life and Adventures of Nicholas Nickelby, and tackling Hamlet, Benvolio and Claudio amongst other Shakespearean roles, Rees recounts his experiences of the work of a theatrical deity. Intercutting stories of cast camaraderie with excerpts from favourite roles, the show recalls the triumphs, mishaps and practical jokes his various encounters with the Bard have brought the classical actor over the years.

First performed in 2007 at Folger Theatre, Washington and following a brief run in Shakespeare's home, Stratford-upon-Avon, in 2010, this was the London premiere of Rees' ninety minute show.

What You Will saw a welcome return to the UK stage for Welsh-born Rees after his success as Co-Director of the most-nominated show on Broadway in the 2012 Tony Awards, Peter and the Starcatchers. Last seen in the West End opposite Ian McKellen in Waiting For Godot, Rees is known for his television work in Cheers, The West Wing and Grey's Anatomy, as well as for screen roles in Robin Hood: Men in Tights, Frida and The Prestige amongst numerous other film, television and stage credits.